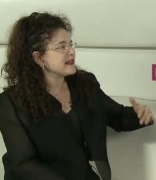 Her research interests are in the area of international economics, corporate finance and the organization of the firm, and in emerging market economies. Her work, both theoretical and empirical, has been published in several top journals. Her latest book (jointly edited with Elhanan Helpman and Thierry Verdier) "The Organization of Firms in a Global Economy" is a collection of essays on the new “new trade theory” and is published at Harvard University Press in 2008.

International Trade, Globalization, European Integration, Cororate Governance and the Theory of the firm, Economics of Transition and Emerging Markets.